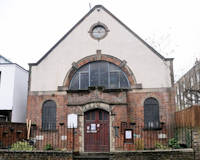 This is where Arthur Conan Doyle's Spiritualist Temple is.

Description: The 90-year-old Rochester Square Spiritualist Temple in Camden was founded in 1926 when the recently converted author Sir Arthur Conan Doyle laid one of the church's foundation stones.

In 1916 Arthur Conan Doyle made a declaration that would impact the rest of his life - he said he believed in Spiritualism. The Fox sisters are credited with the birth of Spiritualism when they discovered they were able to communicate with a spirit that seemed to inhabit their home in Hydesville, New York.

Conan Doyle, brought up a catholic, had attended seances and lectures on hypnotism previously and in fact investigated hauntings. He began to deliver lectures on spiritualism and criticism poured in, especially following his claim that the Cottingley Fairies mystery of 1992 were genuine.