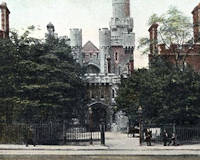 This is where Myra Hindley was incarcerated in 1966.

Description: HM Prison Holloway was the largest womens' prison in western Europe until its closure in June 2016.

It was opened in October 1852 as a mixed-sex prison, but due to growing demand for space for female prisoners after the closure of Newgate, in 1903 it became female-only.

Diana Mitford and her husband Sir Oswald Mosley lived together here in a cottage in the prison grounds, eventually being released in 1943.

In 1966, Moors murderess Myra Hindley stayed here, as well as Maxine Carr (in 2002), who gave a false alibi for Soham murderer Ian Huntley.

It has featured as a TV location many times including on Call the Midwife, Rumpole Of The Bailey, and Upstairs, Downstairs.

In Autumn 2017 the prison buildings still stand, with draft proposals for the site including housing, a public open green space, playground, women's centre and a small amount of commercial space.

The Siege of Sidney Street», 3.9km

Home of the Tichborne Claimant», 5.1km