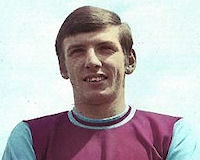 Description: This is the childhood home of celebrated member of England's 1966 World Cup-winning team, Martin Peters.

He was was born in Plaistow in 1943 and moved here to Dagenham as a child, attending local Fanshawe School.

No doubt he played football in the park across the main road dreaming of scoring in a World Cup Final!