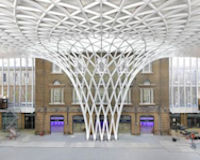 This is where Boudicca fought her final battle.

Description: King's Cross is one of the busiest railway stations in the United Kingdom, the southern terminus of the East Coast Main Line to the East, East Midlands, and North East of England and Scotland beyond.

The station was first opened in 1852 by the Great Northern Railway (GNR) for the new East Coast Main Line, quickly expanding several times over to cater for suburban lines and see companies flagship engines like the Flying Scotsman and Mallard.

The King's Cross fire in 1987 started in the machine room for a wooden escalator between the mainline station and the London Underground station's Piccadilly line platforms. The escalator burnt up and much of the tube station caught fire with smoke spreading to the main line station, killing 31 people.

In the late 20th century, the area around the station was rundown and known for its seedy and downmarket character, and was used as a backdrop for several films as a result.

The station became well known for its association with the Harry Potter books and films, particularly the fictional Platform 9.

King's Cross is also very close to the site (if not the site) of Boudica and her Celtic Iceni armies final battle with Romans. For those of a supernatural bent, Boudica's ghost is reported to haunt passages under the station near platforms 810.

Birthplace of the Underground», 2.5km