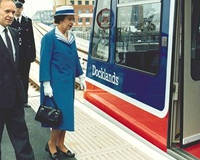 This is where the Queen officially opened the DLR.

Description: Island Gardens DLR station is close to the southern tip of the Isle of Dogs and the River Thames with super views across the river to Greenwich. The Island Gardens is the park adjacent to the station which also includes the entrance to the Greenwich Foot Tunnel beneath the Thames.

The original Island Gardens DLR station was opened on 31st August 1987 as the southern terminus of the initial system.

It was also the place where Queen Elizabeth II officially opened the Docklands Light Railway on July 30th 1987.

The Royal Artillery Band played as the Queen was guided from her royal boat by the Mayor of Tower Hamlets to unveil a plaque and ascend the circular staircase and take the first trip (and like us, pretend to be the driver!).