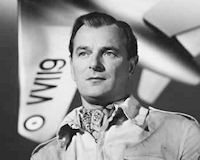 This is where actor Nigel Patrick was born.

Description: This is the house where debonair British actor Nigel Patrick (1912-1981) was born as Nigel Dennis Patrick Wemyss-Gordon. He changed his name in 1940 for the stage.

He was married in St James' Roman Catholic Church to the actress Beatrice Campbell from 1951 (2 children) until her death in 1979. He passed away 2 years later.