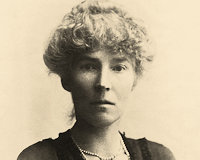 Description: Travel writer, diplomat and pioneer Gertrude Margaret Lowthian Bell (1868-1926) is best remembered for her adventurous writings on the Middle East and her pivotal role in establishing the modern state of Iraq.

Bell was born into the sixth richest family in England, based in North Yorkshire and in 1884 she was sent to school at Queen's College and stayed here with her stepmother's family.

This would be her London base for more than 40 years. She was an active campaigner against women's suffrage, becoming a founder of the Anti-Suffrage League in 1908.

One of her longest stays was in 1915 when she managed the London office of the Red Cross Wounded and Missing Enquiry Bureau.

Bell became involved in politics in the Middle East during the First World War largely as a result of her mastery of Arabic languages, tribal allegiances and geography.

Bell has been the subject of a TV documentary (Letters from Baghdad) and feature film (Queen of the Desert), starring Nicole Kidman.