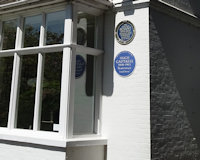 The home of Besant, Gaitskell and Pentland!

Description: This was the London home of Statesman and Labour Leader Hugh Gaitskell (1906-1963). He married Dora Frost in 1937 and they moved in here shortly after, having 2 children.

Hugh was elected to Parliament in 1945 and held office in Clement Attlee's governments, most notably as the Minister of Fuel and Power - after the bitter winter of 194647. He later became the Chancellor of the Exchequer and was Leader of the Labour Party from 1955 to 1963.

A plaque was erected in 1986 by Greater London Council.

This impressive home was originally built in 1892 for the novelist and antiquary Sir Walter Besant, for whom there is also a plaque on the house.

In addition, Lord Pentland - the Governor of Madras, also occupied the house in the 1920's.