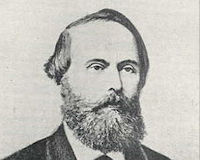 The workshop and home of inventor James Wimshurst.

Description: James Wimshurst became a ship surveyor to Lloyd's Register, from 1865 until 1874 and then for twenty-five years, 187499, was chief shipwright surveyor to the Board of Trade in London.

Living here at this address, and building himself a good private workshop, for twenty years devoted himself to the improvement and construction of electrical influence machines.

The early machines of this type had all sprung from Volta's electrophorus but it was not until the work of Topler, Holtz and Wimshurst that design progress was made. The machine with radial strips of tinfoil and contact brushes was described by Holtz in 1881 and again in 1882 and 1883 by Wimshurst, whose improvements were made independently.

Altogether he made more than ninety Wimshurst machines. Many of these were presented to hospitals, and two of his very large ones are preserved in the Science Museum and his largest in a museum in Chicago.

A member of the Physical and Rontgen Societies, and a manager of the Royal Institution, Wimshurst was elected a fellow of the Royal Society in 1898.