Home of Stanley and Ida Lupino 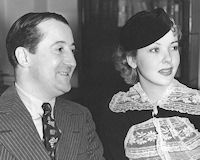 This is where the talented Lupino family lived in London.

Description: This is the home of of comic actor Stanley Lupino and his daughter Ida Lupino.

Stanley was an English actor, dancer, singer, librettist, director and a short story writer. He trod the boards through pantomimes at the Theatre Royal Drury Lane to music hall performer. He wrote his own shows that ran across London, he played on Broadway for 2 years and returned to write and perform in more than 300 shows of Sporting Love from 1934.

His daughter Ida grew up here before becoming one of the top Hollywood players in the 1950's. She was the first woman to direct a film noir (1953's The Hitch-Hiker). She acted in 59 films, directed 8, and she became a US citizen in 1948.
Ida was also a prolific director of television productions including being the only woman to direct episodes of the original The Twilight Zone series and the only director to have starred in the show.

A blue plaque was erected on this house on the 16th February 2016 by the theatre charity The Music Hall Guild of Great Britain and America.