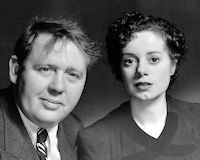 This is where actors Charles Laughton and Elsa Lanchester lived.

Description: When both actors were up and coming Charles Laughton (1899-1962) shared this flat with his wife Elsa Lanchester for 3 years (1928-1931) immediately before they emigrated to the USA and Hollywood stardom.

In 1927, he was cast in a play Mr. Prohack with his future wife Elsa Lanchester, who he married in 1929 and with whom he lived and worked until his death; they had no children. The couple became American citizens in 1950.

Laughton became a major movie star with The Barretts of Wimpole Street, The Island Of Lost Souls, Ruggles of Red Gap, Mutiny On The Bounty, The Hunchback Of Notre Dame, The Private Life Of Henry VIII and The Big Clock just a few. He directed the acclaimed thriller 'The Night of the Hunter'.

Elsa claimed later in life that Laughton was bisexual, and that she had once thrown Laughton out of the Percy Street flat when she caught him with one of the area's many rent boys.