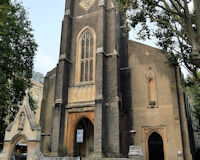 This is where Poppy Delevingne and James Cook were married.

Description: St Pauls Church in Knightsbridge is an Anglican Church in London's West End, dating back to 1843.

This splendidly decorated church was the first in London to champion the ideals of the Tractarians - or the Oxford Movement. They sought to restore Catholic order and spirituality to the Established Church, and to enrich its worship by the recovery of its traditions.

The Church of the Good Shepherd», 6.2km