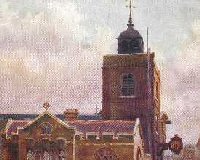 The oldest church in London.

Description: All Hallows, situated next to the Tower of London, is the oldest church in the City of London, with parts of the building dating from 675 AD.

Beneath an original Saxon arch, a Roman pavement was discovered in 1926, evidence of city life on this site for over 2000 years.

Following execution on Tower Hill, numerous beheaded bodies were brought into the church, including those of Thomas More, Bishop John Fisher and Archbishop Laud.

William Penn, founder of Pennsylvania, was baptised in the church and educated in the schoolroom (now the Parish Room). John Quincy Adams, sixth president of the USA, was married in All Hallows in 1797.

In 1666 the Great Fire of London started in Pudding Lane, a few hundred yards from the church. All Hallows survived through the efforts of Admiral Penn, William Penn's father. But in 1940 Hitler's bombs succeeded where the Great Fire had failed. Only the tower and the walls remained but the late Queen Mother laid a new foundation stone in 1948.

Samuel Pepys watched the Great Fire of London from the tower of this church.

Open all year round, this wonderful church is steeped in history and continues to minister to a community of workers and visitors.