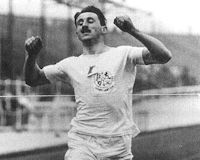 This is where Olympic gold medallist Halswelle was born.

Description: Today it's part of the fine arts world and surrounded by galleries and dealers, but once this was home to an olympic gold medallist. But he didnt win gold in the normal manner.

This was where Wyndham Halswelle was born and his father the celebrated Scottish watercolourist Keeley Halswelle lived when in London. He exhibited and was an associate at the Royal Academy around the corner and frequently travelled abroad for his work.

Wyndham was an athletic talent at Charterhouse School and signed up to be a soldier at the Royal Military College, Sandhurst. While his first regiment was in South Africa in 1902 for the Second Boer War, Halswelle's ability was recognised by athletic coach Jimmy Curran who persuaded Halswelle to take up athletics seriously when his regiment returned to Edinburgh in 1904.

In 1904 he was army champion for 880 yards, a year later he won the Scottish and AAA 440 yard titles and the following year in the 1906 Athens Intercalated Olympics, he won a silver medal in the 400 metres and a bronze in the 800 metres.

In 1908 Summer Olympics, Halswelle reached the final of the 400m with the fastest qualifying time (an Olympic record of 48.4s).

The 400m was a different event then, the race was not run in lanes and blocking competitors was an acceptable strategy in the United States, but not under British rules.

In the final Halswelle was blocked early on and then, coming off the final bend, Robbins led Carpenter by a yard, with Halswelle in third just behind biding his time. Carpenter ran wide, forcing Halswelle to the very edge the track, using his elbow to prevent Halswelle overtaking - and judges declared the race void. Carpenter was disqualified.

The race was ordered to be rerun in lanes two days later; however, the other two U.S. runners refused to race, so a reluctant Halswelle ran the race by himself to win the gold in a time of 50.2 seconds.

It is the only occasion in Olympic history where the final of an athletics event only included one athlete!

As a result of the controversy, from the 1912 Olympics onwards all 400 metre races were run in lanes, and the International Amateur Athletic Federation was founded to establish uniform worldwide rules for athletics.

The controversy soured Halswelle's view of athletics and he retired after a farewell appearance at the 1908 Glasgow Rangers Sports.

He was killed by a sniper in World War I trying to rescue one of his wounded soldiers.