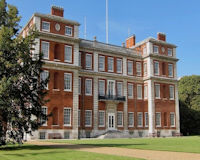 The grand mansion where King George V was born.

It was built in 1711 by Sir Christopher Wren for Sarah Churchill, the Duchess of Marlborough, the favourite and confidante of Queen Anne. She sacked Wren before it was finished though.

It was primarily used by members of the Royal Family, such as Prince Albert Edward of Wales and his wife Alexandra, Queen Adelaide, widow of William IV.

From 1853 to 1861 Prince Albert, the consort of Queen Victoria, arranged for the building to be used by the National Art Training School, later becoming the Royal College of Art.

The Prince of Wales, later King Edward VII, and his wife the Princess of Wales, Alexandra of Denmark, lived here and their second son (who became King George V), was born here in 1865. The family lived there until Queen Victoria died in 1901, when Edward acceded the throne and they moved to nearby Buckingham Palace.

After Edward VII died in 1910, Alexandra again made Marlborough House her London home until her death in 1925.