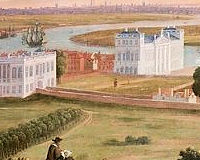 The site of the former Royal Palace where Henry VIII was born.

Description: The Palace of Placentia was a Royal Palace built here by Humphrey, the Duke of Gloucester, in 1443 during the reign of Henry VI, originally called Bella Court.

However, by 1447, Humphrey had fallen out of favour with Henry VI and was arrested for high treason. He died in prison, likely due to a stroke although it was popularly believed he was murdered (as depicted in William Shakespeare's plays about Henry VI).

Margaret of Anjou took over Bella Court, renaming it the Palace of Placentia. Henry VII rebuilt the palace, featuring three large courtyards, between 1498 and 1504, and it remained the principal royal palace for the next two centuries, and becoming the birthplace of King Henry VIII in 1491.

Following the king's marriage to Catherine of Aragon, Placentia became the birthplace of Mary I in 1516, and after marrying Anne Boleyn, his daughter, later Queen Elizabeth I, was also born here in 1533. Henry VIII also married Anne of Cleves here in 1540.

Placentia fell into disrepair during the English Civil War, serving time as a biscuit factory and a prisoner-of-war camp.

It was demolished by Charles II in 1660, to make way for a new palace which was never constructed. Nearly 40 years later, the Greenwich Hospital (now the Old Royal Naval College) was built on the site.