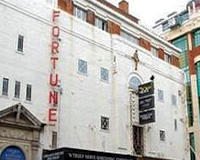 One of the smallest West End Theatres with just 432 seats.

Description: The Fortune Theatre is one of the smallest West End theatres.

It was first opened in 1924 after author, playwright and impresario Laurence Cowen bought the site of the old Albion Tavern, a public house frequented by Georgian and Victorian actors.

It remains one of the first buildings in London to experiment with concrete. It's facade is principally made of bush-hammered concrete with brick piers supporting the roof.

Since the demolition of the original Wembley Stadium, the theatre is now the oldest remaining public building designed wholly using concrete as a textured and exposed faade. It is was Grade II listed by English Heritage in May 1994.

Since 1989 the theatre has hosted the long-running play The Woman in Black.