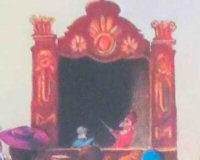 The birthplace in England of the Punch and Judy puppet show.

Description: On the 9th May 1662 Samuel Pepys was coming back from visiting a nearby ale-house when he stopped to watch a puppet show that was performing in Covent Garden.

It was the month that King Charles II (recently restored to the throne) was getting married and hordes of entertainers from all over Europe had thronged to the city hoping to make some money.

The Italian puppet play that Pepys saw was presented by puppetmaster Pietro Gimonde - or 'Signor Bologna' as he was known to his audience - and starred one of the great comic characters of all time.

The star puppet came originally from Naples, where he was known as Pulcinella, then toured across Europe to France - where he was called Polichinelle - and finally came to captivate English audiences who settled for calling him Punchinello.

Pepys' diary entry for 9th May reporting that he had seen the show is taken by today's performers as marking Punch's 'birthday'.