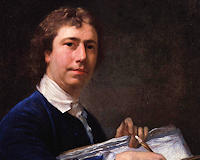 Description: Artist Nathaniel Hone was born in Dublin in 1718, and married Molly Earle, daughter of the 4th Duke of Argyll, in York Minster in 1742. They had five sons and five daughters.

By 1748 they had all moved to London, and he quickly gained a reputation for portraiture and miniature painting, especially in enamel, sitters included George Whitefield, John Wesley and Sir John Fielding.

Between 1750 and 1752, he travelled to Italy to study art and architecture and where he was elected a member of the Florentine Academy in 1752.

On his return to England he became one of the thirty-four founding members of The Royal Academy in London in 1768.
Hone, had a poor relationship with fellow RA founder Joshua Reynolds and controversially attacked him in the painting 'The Conjuror'.

He died in this house on the 14th August 1784 and was buried in Hendon Churchyard.