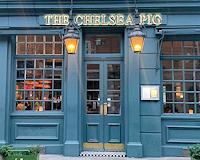 Description: The Chelsea Pig (formerly the Pig's Ear) dates back to the late 17th century when it was named the Black Lion.

Prince William and Kate have visited here, waiting downstairs for 2 friends, in 2005. The foursome and 2 bodyguards then ate at the gastropub upstairs.

Allegedly Peninsular War hero John Moore 'quaffed the unadulterated beverage of malt and hops' here. By 1820 it boasted a bowling green and a tea garden. The present pub was rebuilt in 1892, and recently remodelled again in 2018.