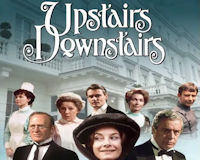 Description: This five storey townhouse at number 65 had a number 1 painted in front to depict the fictional home of the Bellamy family in TV sitcom Upstairs Downstairs.

In the 1970s Upstairs Downstairs was a massive showing in 36 countries and to more than a billion viewers. It was set in the 1930s and ran for 68 episodes featuring fictional inhabitants Lord and Lady Bellamy and their servants.

The '1' was painted over in white after filming was completed.

Its all flats now, selling for many millions of pounds each.