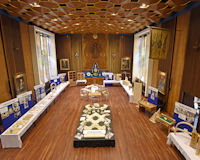 Carpenters Hall an ancient site of the woodworkers guild.

Description: Carpenters Hall is the entertaining room for the Carpenters Company, a City of London Livery Company that was granted a coat of arms in 1466 and its first royal charter in 1477.

Originally established as a medieval trade guild to safeguard the welfare and interests of carpenters in the City of London. Today it focuses on its charitable activities and support for the craft of woodworking through scholarships, competitions and college.

Its influence over the building trade declined after the Great Fire of 1666, when many timber buildings were subsequently rebuilt in brick and stone.

Carpenters Hall houses a collection of paintings, silver, artefacts, works of art and furniture which reflect the Company's long history. The most important pieces are the four Master and Wardens steeple cups made between 1609-1624 and play an important role in ceremonial occasions. The Tudor crowns worn by the Master and Wardens on ceremonial occasions are amongst the oldest in the City of London, with the Masters crown dating from 1561.

Other treasures include three sixteenth century wall paintings from the first Hall, now incorporated into the present Hall.

A fire in the mid-nineteenth century severely weakened the building and a second Hall was built during the 1870s, opening in 1880. The third Hall (that you see today) was built following an air raid in 1941 when the second Hall was severely damaged.

The building was Grade II listed on 10th November 1977.

Home of the Speaking Clock», 7.2km