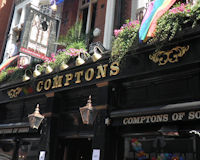 The oldest gay bar in Soho.

Description: Built on the site of the Swiss Hotel, Comptons has been here at the heart of the gay scene since June 1986.

Today you will find a large, Victorian-styled pub with two bars - a ground-floor horse-shoe bar and upstairs a lounge area. It is famous today for being the oldest gay bar in Soho and one of Londons most-celebrated LGBTQIA+ venues.