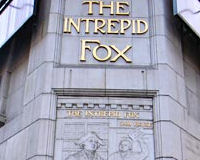 The former goth pub where Jagger got Ronnie Wood on board.

Description: This, for 222 years, was The Intrepid Fox, an old boozer turned goth pub, before it was sadly closed in 2006. The ceramic faience exterior however since has been retained including the splendid relief of Charles James Fox whom it was named after.

It was originally named after statesman Charles James Fox by its first owner, and keen supporter, Samuel House. During the election of 1784 House offered free beer for those who voted for Fox. Georgiana, the controversial Duchess of Devonshire, canvassed many alehouses across the city for Fox, and also became celebrated here, much to her own ridicule.