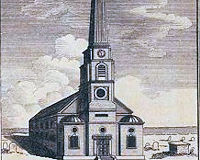 The music concert hall in a former church.

Description: St Luke's is a historic Anglican church building designed by John James and Nicholas Hawksmoor. It served as a parish church from 1733 to 1959 and is a Grade I listed building.

Over many decades serious subsidence caused structural problems, and despite many initiatives, the dry summer of 1959 was calamitous. Some columns were hanging from the roof that they should have been supporting, and the building was declared unsafe, the roof removed and the church abandoned.

After closure, and despite being a listed building, the church stood derelict for almost 40 years. Since 2003 it has been a music centre run by the London Symphony Orchestra.

The original spire featured a weather vane with the head of a dragon with a fiery comet-like tail. The humorous locals called it a louse, and by the mid-20th century had gained the church the nickname 'lousy St Luke's'.

More weather connections with St Lukes, as it had the only City of London weather station situated within its churchyard.

The Black Madonna of Willesden», 6.8km