Description: Prior to the end of the 17th century the area was a marshland and called the Cock & Pye fields. In the early 1690s Thomas Neale, Master of the Mint and also a property speculator, acquired this plot from the Crown.

He devised the characteristic six dials street layout in order to maximise the number of houses that could be built on the site and therefore his profit. He soon changed it to seven, but the original centrepiece still has the original six.

The names of the seven streets were chosen with the intention of attracting well to do residents, however some of the names have subsequently been simplified or changed because of duplication with other streets in London. They were originally: Little and Great Earl Street (now Earlham Street), Little and Great White Lyon Street (now Mercer Street), Queen Street (now Shorts Gardens) and Little & Great St. Andrews Street (now Monmouth Street). Some of the original street signs can still be seen attached to buildings in the area.

Later, the area had failed to establish itself as Neale hoped and deteriorated into a slum, renowned for its gin shops. At one point each of the seven apexes facing the Monument housed a pub, their cellars and vaults connected in the basement providing handy escape routes should the need arise. 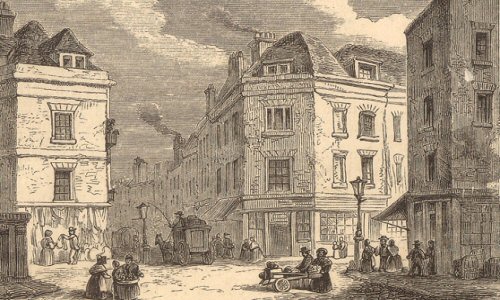 2» All the original street names have been changed. (Tami)
Posted by Tami on 2009-01-09
1» My wifes great, great grandmother was born in Tring Street, Seven Dials in 1838. We have tried without success to find Tring Street on London maps and presume it was demolished as part of slum clearance at some stage in the past - can anybody tells us where it was situated in present-day London and when it was knocked down? Any help at all would be gratefully received. (Ed Barry)
Posted by Ed Barry on 2008-01-24