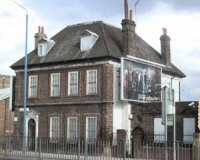 The Hall is thought to be the oldest brick house in London and was built by Holy Trinity Priory in the 1490s on the foundations of the 12th century Lower Bramerley Manor. These remain visible today in the cellar.

Bromley Hall, recently named winner of this yearâs RICS* Building Conservation Award, was originally built by Holy Trinity Priory in the 1490âs and after it was seized by the crown in 1531, it became a haunt of Henry VIII who extravagantly refurbished it with rich tapestries and paintings. Traces of the early decoration remain to this day. Examples include a carved hunting scene, 1490âs beams with the leather washers that hung the tapestries, Tudor windows and most spectacularly three wall paintings dating from the 15th and 16th centuries.

The exact centre of London», 5.0km