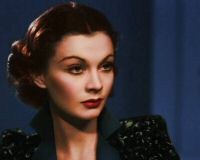 Description: Actress Vivien Leigh lived and died here. She is best known for her Academy Award winning portrayal of Scarlett O'Hara in Gone With the Wind (1939). After playing Blanche DuBois in the 1949 London staging of A Streetcar Named Desire, she won her second Oscar for the 1951 film version.

Vivien Leigh died here on July 7, 1967 from complications of her tuberculosis.