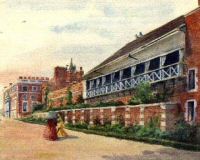 The court Henry VIII built and used to play Tennis on.

Description: Tennis was played on this site by Henry VIII from 1528 who built it for his racquet-less version. As a young, handsome, athletic man Henry was passionately addicted to sport, and particularly to tennis.

Henry played a gloved version and legend has it that he heard of the execution of Queen Anne Boleyn as he played tennis at Hampton Court Palace.

Since the end of the 17th century the court has undergone little alteration.

The court is the oldest tennis court in use in the world; and the only one in Great Britain which the public are admitted (April-October) to see and, if play is in progress, to watch tennis being played.

The Lord Derby and Football», 19.km