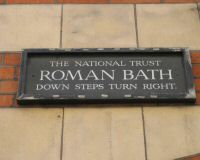 The Roman Bath, open to the public for centuries

Description:
It's certainly an old bath but whether it is Roman is open to doubt, but it may well have been part of the long gone Royal Palace Arundel House.

In the 19th century the 'Roman Bath' was opened to the public and cold plunges taken here were believed to be good for the health. Charles Dickens's character, David Copperfield, took many plunges in this cold bath.

Visits are by appointment only but the Roman Bath can be viewed through a full-length window on Surrey Street by pressing a light switch on the outside wall.

At the turn of the 20th century it was owned by a draper in Oxford Street who famously provided access to subscribers only via adverts in the London press. Two Guineas a year was the price but sadly he only had two subscribers, according to James Bone of the London Echoing.