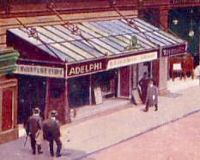 The ghost of murdered actor William Terris haunts the Adelphi.

Description: William Terriss was a popular actor who was killed by a jealous rival on December 16th 1897 during the run of the Secret Service.

Actor Richard Prince hated Terriss and killed him as Terris was unlocking the Adelphi stage door.

Terris died in the arms of his Mistress, Jessie Milward. As he was dying he whispered I'll be back.

The first reporting of the ghost of Terris was 1928. A stranger saw a male figure in Maiden Lane which he said was a ghost. He later identified the figure as Terris from a photograph.

Poltergeist activity started to manifest in the dressing room once used by Milward.

Later again there was a sighting in the Adelphi Theatre.