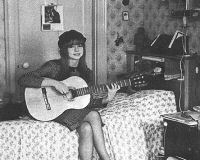 This is where the Beatles wrote Yesterday and Eleanor Rigby.

Description: This was the home of Paul McCartneyâs then girlfriend, Jane Asher and her family. He lived here in the attic when he first moved down to London.

Jane Asherâs mother, Margaret, was a music teacher and taught in a small basement music room, where Lennon and McCartney wrote the Beatleâs first US number 1 I Want To Hold Your Hand and also Eleanor Rigby.

The ground floor was Dr. Asherâs reception room, the first floor a parlour with an out of tune piano and the third was the family floor with living room and Jane Asherâs bedroom.

Peter Asher and McCartney had rooms in the attic with Asherâs room being the one that overlooked the street at the front of the house and McCartneysâs at the back overlooking Browning Mews.

McCartney wrote Yesterday on the piano in his attic bedroom.

Beatles fans once stole one of the cast iron knobs from the front railings of the house. Dr. Asher took a casting of a remaining knob and then melted down any bits of available iron around the house to make a replacement. Mrs Asher was quite angry as she had been fond of some of the things he had selected as scrap.
Gathered fans became such a problem during the filming of Help! in Spring 1965 that Dr. Asher devised an escape route out of McCartneyâs bedroom window.

McCartney would climb across into a flat owned by an old army Colonel at No. 56 and would be let down into the lift and would exit into the back street through the basement flat (10 Browning Mews).

McCartney brought the couple living in the flat a fridge by way of thanks.

1» The Beatles first No 1 in the world was "From Me To You". And wasnt written in Wimpole Street. It written by John and Paul while on a coach heading to Shrewsbury during a 1962/3 UK tour. But, of course, "I Want To Hold Your Hand" was their first No 1 in the USA, which the copy above acknowledges, its the headline that is wrong. Bloody Americans, they keep thinking The Beatles were theirs! (Brendan Martin)
Posted by Brendan Martin on 2010-03-18