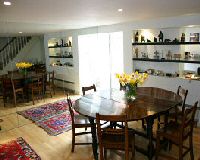 The home at the scandal of the Jowell's bribe affair.

Description: This is where in 2006, Culture Secretary Tessa Jowell lived, and the house that was at the centre of the controversy over her husband's financial affairs.

Ms Jowell, separated from international lawyer David Mills in March amid the furore.

The four-bedroom Victorian terrace property in Kentish Town was on the market for Â£950,000 with estate agents Day Morris Associates.

Mr Mills faced claims in Italy - which he strongly denied - that he paid off a joint mortgage on the home using a bribe from former Italian PM Silvio Berlusconi.

Ms Jowell was cleared of allegations of misconduct over a loan agreement on the property she jointly signed with her estranged husband.

Their split was dismissed by some at the time as a smokescreen to deflect attention from the controversy.

They patched things up in June.

Embassy of Ecuador and Assange», 3.9km