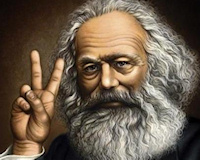 Description: When Marx first moved to London, in 1849, he had already been expelled from many other cities across Europe. He still believed that he would return home and that his time in England would be temporary.

He rented this house, not in a cheap area even in those days. His fourth son, Henry, was born here on Guy Fawkes Night resulting in the nickname Guido.

In the end the rent was too high for the Marxs and half a year after moving in they were evicted.