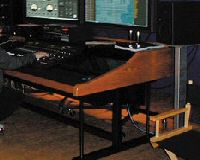 The recording studio where Kate Moss was snapped doing drugs.

Description: Metropolis was Babyshambles recording studio where in 2005 the Daily Mail snapped photo's of Kate Moss and the band taking cocaine.

Detectives raided the Metropolis studio in Chiswick, West London, where the footage was shot but they found no traces of any banned drug. The model was at the studio during a recording session by her boyfriend, drug addict Pete Doherty.

Two others could face charges over the incident. Mick Jones, 50, formerly of The Clash and now record producer for Doherty's band Baby-shambles, and another man, a close associate of Doherty, were also pictured taking the substance and could be charged with possession of a Class A drug.