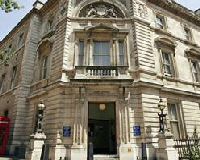 Bow Street magistrates was here, where the Krays were charged.

Description: Although the magistrates system started a lot earlier, the Bow Street magistrates opened in 1881, and has seen many famous names pass through its doors, including Oscar Wilde, Dr Crippen, and the Kray Twins.

It was at the court's former premises - across the road from its current site in London's Covent Garden - that the fledgling magistrates system took shape from 1739 under Sir Thomas De Veil. In 1750, the Bow Street Runners, who paved the way for the modern police force, were formed there.

The court was closed in July 2006 and is to be redeveloped as a luxury hotel.

1» Its a little known fact that naughty boy Casanova, who lived in Soho, was bound over here to keep the peace. (Frank H. Lawson)
Posted by Frank H. Lawson on 2011-08-31

The Siege of Sidney Street», 2.8km