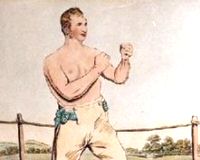 Tom Cribb was a bare knuckle boxing champion who ran a pub here.

Description: Tom Cribb (1781-1848) was a bare-knuckle boxing World champion who went on to run the Union Arms pub at number 26 Panton Street. This current pub is named in his honour.

Cribbs two most famous fights, in 1810 and 1811, were against the black American Tom Molineaux, a former slave and a formidable fighter, who weighed in at 185lbs. Molineaux, the first American to challenge for the British title, lost the fight after 32 rounds, retiring with exhaustion. The return bout was another victory for Cribb. He broke Molineauxâs jaw, and finished off the American in the 19th round.

On July 19th 1821, George IV was crowned at Westminster Abbey and Cribb was one of the countryâs 18 leading boxers chosen by the King to be ushers and pages.

6» If you want to find out more about Tom Cribb visit my website www.tomcribb.freeservers.com Alan (Alan)
Posted by Alan on 2010-08-17
5» Tommy Cribb next door to me, he is a direct decendant of Tom Cribb. Hes living in Cullompton, Devon. (Anonymous)
Posted by Anonymous on 2010-05-15
4» We have recently done our family tree and Tom Cribb was also a great great great great grand father. Who is Brenda??? (Clare Haines)
Posted by Clare Haines on 2010-04-30
3» I have been told by my Grand mother that I am related to Tom Cribb. I would love to find out how. May I and Brenda are related. (marion aitken)
Posted by marion aitken on 2010-03-18
2» in his 32 round bout with Molineaux, Cribb was almost defeated in round 18 when he broke his own right hand; he nonetheless continued to fight, winning in round 32(!) Tough, tough guys. (Jim)
Posted by Jim on 2009-08-20
1» I intend to visit the Tom Cribb in the future as he was my Great Great Great Grandfather, My family and I are interested to know what happened to his championship cups and belts and are hoping to visit the boxing museum ,hope fully they might be able to give us some information. Regards - Brenda Freel (Brenda)
Posted by Brenda on 2008-08-10