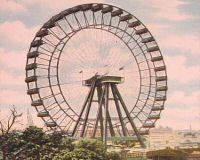 This was where the first London Eye used to be before the wars.

Description: Here was the pre-cursor to the London Eye, built for the exhibition at Earls Court in 1894 and capable of carrying 1,200 passengers within its 40 carriages. It was modelled on the original one in Chicago. This wheel stayed in service until 1906 by which time it had carried over 2.5 million passengers.

It was built by two young Australian engineers named Adam Gaddelin and Gareth Watson and was the first of over 200 ferris wheels that they built world-wide.

One night the wheel got stuck and those in the upper carriages who couldnt climb down had to stay there all night. Coffee and sandwiches were hoisted up and the prisoners were brought down by the fire brigade the following day and compensated.

The Devils of Cornhill», 5.2km

Perfect for looking at Stars», 3.5km