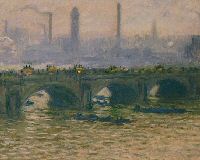 This was where it is thought Claude Monet painted London from.

Description: This is where St Thomas's Hospital stood before it was destroyed in the blitz. It was from here that Claude Monet painted his infamous 'London Series'.

It came to light in August 2006 that Monet was probably painting the smog of the day before him and it wasnt creative impressionism at work.

Using the position of the Sun, they calculated the date when the paintings were made, as well as the precise location where Monet set up his easel â the far end of St Thomasâ Hospital, on the South Bank of the Thames, opposite the British legislature.

It was in the grounds of the Hospital in Southwark that the first complete translation of the bible into English was made. In 1533, Thomas Cromwell and Sir Thomas More suggested that the Scriptures should be translated into `the vulgar tongue'.