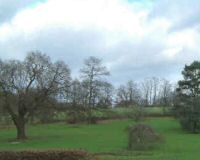 Description: In the early 1930s an ancient oak tree within this Park and alongside Church Hill Road burst into flames on a clear summer day.

When no apparent cause could be found for the conflagration, the mysterious phenomena of spontaneous combustion was suggested. But speculation developed rapidly and has never been resolved, particularly when it was noted that this tree was not just one of many.

It had a special distinction.

This was the actual oak tree under which the famous 18th century religious visionary and prophetess Joanna Southcott, used to sit during her many visits to friends in East Barnet. It was here that she was said to have received the inspiration that she was the woman described in Chapter 12 of The Bibleâs Book of Revelation, leading to her many predictions and secrets supposedly contained after her death in the infamous Joanna Southcottâs box about which controversy has never totally subsided.

Sutcliffe Park and The Quaggy», 14.km