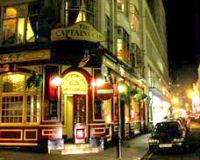 This pub is famous for the Round The Horne teams visits.

Description: This large West End boozer is famous for being the drinking hole frequented by the cast of BBC Radio's Round The Horne in the 1960s and even gets a mention in some of the shows as it was just round the corner from where they recorded - the Paris Theatre.

It's built on the site of the 18th century Coaching Inn -the Cock Tavern, and later named The Punch House. It's current name is from one of the rooms upstairs which were all named after a popular theme.

1» Nearly sixty years ago I was doing my National Service as a 2nd Lt with the 75 HAA Regt Royal Artillery, based at Milton Barracks in Gravesend Kent. About a half dozen or so young officers who frequented the West End theaters agreed that after we were demobbed whenever we were in London we would try to have a drink in the CAPTAINS CABIN and sign THE BOOK which would be kept behind the bar. I made it once before emigrating to Canada in 1954. My next visit was in 2003 but by that time the BOOK was no longer there. If one of those fellows reads this,would love to catch up on old times. Brian M. (Alamotex)
Posted by Alamotex on 2010-11-07

School to an Eccentric Comedian», 3.0km