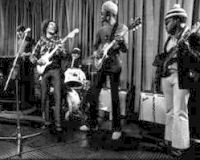 This is the site of The Speakeasy Club, infamous rock venue.

Description: The 'Speak' opened in 1966, and became well known as a late night drinking club popular with customers associated with the music industry, ranging from roadies through to The Beatles.

The Who included it in the Radio London / Speakeasy / Rotosound Strings commercial insert for their Sell Out album in 1967.

The Speakeasy also hosted performances by some of the finest acts of the time, including Jimi Hendrix, Deep Purple, Bob Marley (pictured) David Bowie, and King Crimson (who debuted at the club).

It was here that the Clash's Joe Strummer got beaten up by a Teddy Boy friend of John Lydon and lost a tooth.

The joint was once owned by the notorious Kray twins.

Tours: The Krays in London

13» When did the Speak close? (himself and I)
Posted by himself and I on 2011-10-12
12» The club was NOT owned by the Krays. JD (Anonymous)
Posted by Anonymous on 2011-10-04
11» Went there many times, I was pretty new in the biz and just got a gig as a sound guy, my first tour: Neil Sedaka, ahh! early teenage dreams. Usually met my mate Graham Reynolds who worked for The Pretty Things and Motorhead (RIP Graham). Used to see the usual suspects every night; Beck, Hendrix, Lemmy, Lynott et al. Saw Neil Young try to play a set after a RFH gig and took 45 mins to tune his guitar he was so pissed (it was still out). Went in one night and Jonny Winter was collapsed on the floor in reception, he was still there when we left. Wasnt there a coffin stood upright in reception? Halcyon days. (Mick Tyas)
Posted by Mick Tyas on 2011-01-26
10» Amen Corner was the first band to have a residency there and Jimi used to come and jam with us. The first time he played Cant Turn You Loose on bass upside down, the guitar that was not him. I still have my original membership card and it was thanks to Laurie OLeary I got my gig with The Strawbs in the early seventies. I have many stories which Ill publish gradually on my blog www.saturdaynightweaver.com. I was a regular there and even drove back from a gig in Edinburgh to get a drink in before 4.00am. Those WERE the days..... (Blue Weaver)
Posted by Blue Weaver on 2010-11-29
9» I used to near on live at this club, even worked behind the bar a few times to help out Ulla ! Saw everyone from Frankie Miller, Thin Lizzie to Rotten and The Clash....it was the place to hang if you were in the know. Lemmie banging on the fruit machine, the pistols sitting on the floor lol great great memories for me. (rozgallagher)
Posted by rozgallagher on 2010-11-29
8» Its interesting that Marc Bolans Rock Shrine is listed as being 5.4km away as Marc and Gloria visited The Speakeasy Club on the evening of 15th September, 1977. They then went on to the Private Club Mortons before Gloria headed for home, but didnt make it because just 1.5km away from their home (at 142 Upper Richmond Road West) the Mini Gloria was driving hit the Chain link Fence & posts, before coming to rest at The Bolan Tree. (Fee Warner)
Posted by Fee Warner on 2009-11-13
7» Amazing club. Possibly the best ever as far as I am concerned as was Nobodys in the village in Grenwich Village in the 1960s. I am sure people like Rod Stewart and Robert Plant will remember both clubs well. Rock on!! (Dee Brown)
Posted by Dee Brown on 2009-08-29
6» A fantastic club, which unfortunately burnt down and moved. It was never as good when it reopened, the magic had gone. (trevor bradley)
Posted by trevor bradley on 2009-03-06
5» I used to work for the Sweet and we often hung out at the Speakeasy it was a huge part of my life in the 70s, I never once paid to get in! (melody howard)
Posted by melody howard on 2009-03-02
4» I used to go there late 60s/early 70s, even though underage. Got banned once. Used to go in with band members/roadies and once they knew you, you always got in. Thought it deteriorated in the early/mid 70s and never went again at all after 1978. The doorman there in 1971 now has his own club in Chelsea and hangs out in the Kings Road. (Leila)
Posted by Leila on 2008-12-29
3» I worked in wigmore st in 1970 for Stirling cooper and we had another showroom next to the Speak and thats when I saw Elton john before he became famous and Neil young and various, great place. (alan finch)
Posted by alan finch on 2008-06-21
2» I went to the speakeasy in the late 1970s. I was married to a sax player and we were friends with lots of musicians, including Paul Cook and Steve Jones. Thin Lizzy used to hang our there as well - almost every night all night. (jo dahn)
Posted by jo dahn on 2008-06-01
1» I went to the "Speak" several times in 1970. I was still at school at the time and took days off to come up to town from Cambridge. There was a great atmosphere with as many faces in the small select crowd as on the stage. I remember the Floyd, Small Faces, Hendrix and lots of very hip roadies..as bizarrely dressed as the musicians. Skin tight satin loon pants, leather studded wrist bands and hair down to the waist. Big moustaches too..before they got labelled as gay. I wore stunning antique silk chiffon dresses bought at Chelsea market, and a suede and cobra skin Ossie Clarke jacket...plus beautiful hand made Chelsea Cobbler boots. I had long hair I could sit on. It was impossible to get in unless you were someone or were with someone. You had to knock on the door and be peered at through a peep hole. (liz wickham)
Posted by liz wickham on 2008-02-06

This is where David Bowie lived», 0.5km