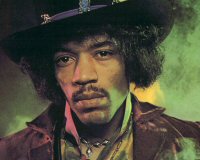 This was Jimi Hendrix's last hotel he booked into.

Description: This is where Jimi Hendrix was living when he died across town at the Samarkand Hotel on September 18th 1970.

But Jimi Hendrix, then 22, wrote his own epitaph two years ago : When I die, I want people to play my music, go wild, and freak out an' do anything they wanna do.