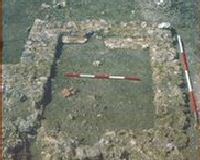 The archeological wonder of Beddington's Roman Villa is here.

Description: Here at these old sewage works a Roman Villa with a Bath House was discovered by excavation in 1871, and then followed up again in 1959-62 and 1981-87.

Prior to 1871, in 1736 Roman foundations, pottery and stone were discovered during ploughing and in 1889 two rooms were discovered which were thought to contain a hypocaust.

Neolithic pottery and Bronze Age and Iron Age settlement have been discovered.