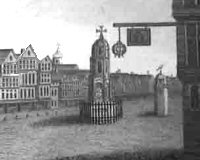 The site of the old Cheapside Cross, destroyed in 1642.

Description: This is where the Cheapside Cross, one of the Eleanor Cross's stood. It was destroyed in 1642 by the anti-catholic government. Fragments exist in the British museum.

Cheapside Cross was initially built in 1290 as one of many crosses Edward I erected to mark those places the bier of his beloved wife Eleanor rested on its progress from Herdeby in Lincolnshire, where the queen had died, to Westminster; Charing Cross and Waltham Cross are other examples.

The Bells of St Mary-le-Bow Church were rung to celebrate the demolition of the cross. One of the activities to celebrate was the burning of The Book of Sports which took place here that fateful year. The book had identified pastimes permitted on the Sabbath during the reigns of James I and Charles I including archery, dancing, Morris dances and May Poles. The Puritans weren't too keen on these horrific pastimes so the goveerment voted that the book should be burnt at the site of the Cheapside Cross. Bah Humbug!