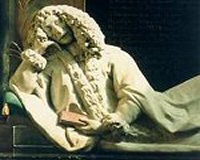 The resting place of one of the greatest quacks of London.

In his day he was famous for his pills, and died (rather surprisingly, in view of the claims made for the pills) in 1672 aged 72.

His miracle pills were called Pillulae Radiis Solis Extractae, and were described by a contemporary William Johnson as containing Vitrum Antimonii
They apparently included sunbeams in the ingredients!


The discovery of Penicillin», 3.6km