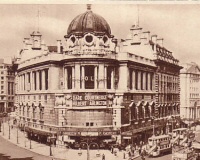 Description: This is where the original Gaiety Theatre stood until it became the London HQ of the Marconi Group in 1908 from where Marconi, set up 2LO the first commercial broadcasting station in London in 1922.

In the same year the BBC (British Broadcasting Company), from this station on the top floor of this building wing, started the first regular, licensed, programmed and advertised broadcasting service in the world.

Today it's a Norman Foster designed hotel featuring over 150 rooms and amazing rooftop terrace bar which becomes a club at night.