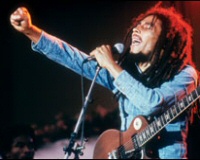 The Jamaican-born star lived at 34 Ridgmount Gardens, Camden, for 2 months when he first came to the UK in 1972.

The plaque, describing Marley as a singer, lyricist and Rastafarian icon, was unveiled in October 2006.

Marley died from cancer in 1981 but still has millions of fans across the globe.

Ridgmount Road was the first of several British homes he lived in during 1972, the year Bob Marley and the Wailers signed to Island Records.

1» Hi, my name is Larissa Gallep. I am a journalist for the Brazilian Mtv Magazine. Im writing a theme about Bob Marleys first residence in London, at 34 Ridgmount Gardens, and I wonder if you could send me some more information about the place and if possible some pictures too. I need to know how many rooms does the house have, if the original furniture is still there (from the time Bob Marley lived there), if there is any interesting story about the place, who used to live with him, if he wrote anything while he lived there and how much it cost to visit the house. Larissa Gallep (Larissa)
Posted by Larissa on 2007-03-05

Mozart and the Hare Cutter», 0.7km