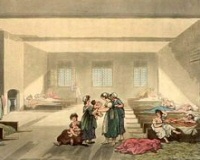 The first House of Correction and prison tourist site.

Description: Bridewell Prison was built during Henry VIII's reign as a Palace at first. Charles V, Holy Roman Emperor, was entertained at Bridewell Palace in 1522. From 1531 to 1539, it was leased by the French Ambassador.

In 1550, the palace was given over to the relief of the poor. Bridewell became not just a refuge, but the first House of Correction.

Both John Reeves and Muggleton (Muggletonians) were imprisoned in Bridewell Prison during 1653 for their beliefs.

The visionary Anna Trapnel, a Fifth Monarchist, was arrested, put on trial, and sent to Bridewell.

On the 17th January 1657, Nayler was taken to Bridewell Prison and locked into a damp, dark cell. He would remain there for two and a half years and, although the order was that he be kept without pen and paper, he managed to produce some of his finest work there.

It serves as the setting for the fourth panel of William Hogarths The Harlots Progress.

The prison was rebuilt in nearby Francis Street in 1834, with places for 800 prisoners. In 1850, the prison was restricted to women and boys under 17.

By 1861, the prison had been renamed the Westminster House of Correction.

In 1867 there was a disastrous attempt to free Irish nationalist remand prisoners by blowing up one of the perimeter walls, there's a plaque commemorating the loss of life in St James Church.

Thereafter the name again changed and by 1869 was the Middlesex House of Correction.

There are still some cells in tact in the basement here in what is now Hugh Myddleton School. 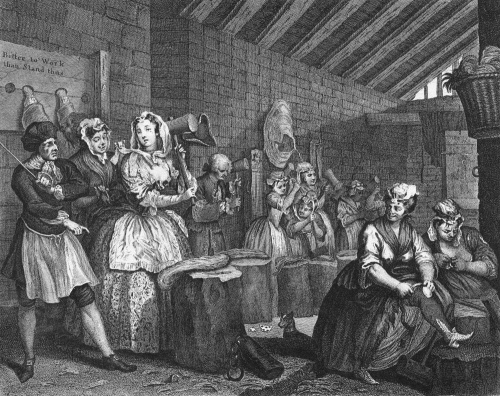 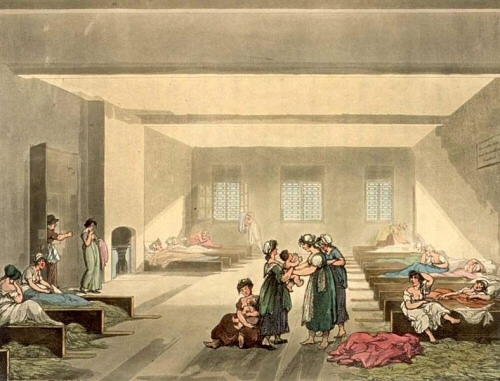 1» I am looking into my family history. I have some questions, hopefully someone can answer them. This, so far, has been the eariliest I can find the name "Bridewell", can someone tell me why this prison was called Bridewell? Where does the name Bridewell originate? (Sandy)
Posted by Sandy on 2010-07-01

The Siege of Sidney Street», 2.1km