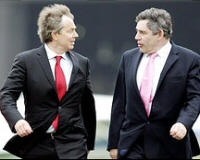 Description: This is where Granita, the mediterranean restaurant used to be, was made famous by being the place where Tony Blair and Gordon Brown cemented their deal.

Supposedly, Gordon Brown would let Blair become Labour leader and run in the general election. If Blair acquired the job of Prime Minister, he would stay in the job for an agreed period of time. He would then resign and hand the job over to Brown.

It would go on to be called the Granita-pact.